Rottweilers Like To Run , Is It True Or Just A Myth?

By Mayukh Saha
Contents hide
1 How Fast Can a Rottweiler Run?
2 How Did We Find The Speed Of A Rottweiler?
3 Can They Run For Longer Distances?
4 Why Can’t The Rottweilers Run Faster?
4.1 1: They Are Built For Strength
4.2 2: Rottweilers Have Short Legs
4.3 3: Rotties Have A Short Face
5 Are They Good Running Partners?
6 Take Care Of Your Pup’s Joints
7 Avoid Running Rottweiler Puppies
8 What Are Better Exercise Options for Rotties?
8.1 Swimming
8.2 Toys & Yard Games
9 Conclusion

Rottweiler seems like the perfect breed of dogs that are good at anything and everything.

They are recruited in important roles in the military to work as service/ therapy dogs. There is only one area where they do not excel that is running. If you are looking for a partner to run with, rottweilers are not the dog to do so. But do they run even though they are not proficient at it?

Rottweilers are always eager to please and are ready for anything you offer, which includes running. These dogs have bulky bodies and are better suited for running over short distances rather than long ones. Their powerful muscles get tired quickly which hinders them from running over long distances.

Let us dive in deeper and look at all the aspects that you would want to know when it comes to Rottweilers and running.

How Fast Can a Rottweiler Run?

These bulky dogs, obviously, do not make the list of the best long-distance runners. But let us look at how fast the Rottweiler can actually run!

Most rottweilers can run at speeds of 18-25 mph, based on the levels of their fitness. You might find some that are either slower or faster, but most of them fall into this range at their best speeds.

An average dog can run as fast as 20 mph, which basically means that a Rottweiler can outpace a dog when it comes to its top speed alone.

The top speed of a Rott is quite impressive but not as good as Greyhounds, who can run at 45mph. When you compare it with the top speed of an average man, which is somewhere around 5mph, the Rottweiler’s speed looks pretty amazing.

How Did We Find The Speed Of A Rottweiler?

It is quite difficult to measure the speed of all the different breeds of dogs. When you add in the different levels of fitness, it becomes nearly impossible. There are people who have actually measured the top speed of their Rottweiler and you can see one in the following video:

The estimated range, 18-25 mph, is actually based on the speed of an average, untrained Rott as compared to an extremely fit and well-trained Rottweiler.

Can They Run For Longer Distances?

It is quite common to spot muscular runners, who run for 100-200 m races, but it is quite rare to find the same running a marathon.

Marathon runners are extremely fit and do not have any extra muscle that slows or weighs them down.

This is just the same for the world of dogs. Dogs with deep chests are great distance runners, including the Vizla, German Shorthaired Pointer, and the Doberman.

Rottweilers have relatively short legs and muscular bodies and do not excel at running for long distances. They are great at running for shorter distances and can only run at top speed for less than a minute.

Read: How to Take Care of an Adult Rottweiler

Why Can’t The Rottweilers Run Faster? 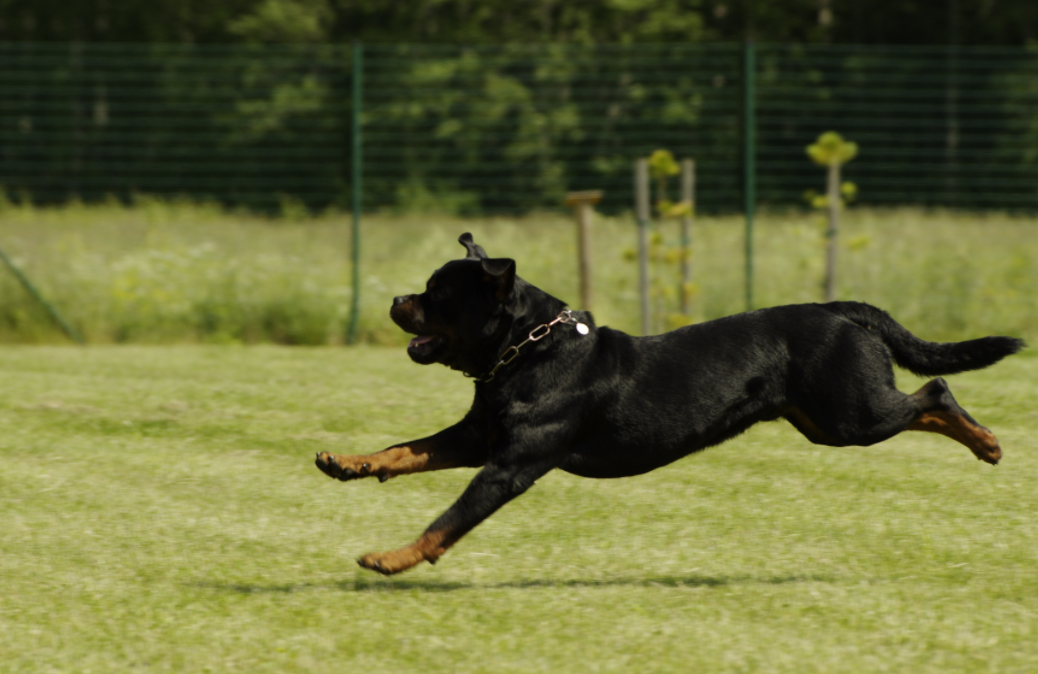 We have already touched on the reasons as to why they are built for speed, but let us now look at some of the factors that slow down these majestic dogs.

1: They Are Built For Strength

Rotts are neither small nor tall. They have an average height of 25 inches (63.5 cm) and an average weight of 110 lbs ( 50 kgs). These puppies are basically just packed with powerful muscles.

Rotts have shorter legs as compared to the other breeds. If you compare the legs of a Rott with a long-legged spaniel, you will visibly see the difference.

Long legs are not essential to make a dog faster but if they are relatively shorter, they can slow it down exponentially. Giraffes have long legs but are not so fast.

Rotties have muscular and thick legs, which makes them better at sprinting and not at running for long distances.

3: Rotties Have A Short Face

Another thing that you might have noticed is that faster breeds have narrow snouts. This offers an efficient airway for the dogs. Greyhounds and German Shepherds are great examples of this.
Rotts do not have a short snout but when you compare them to the faster breeds, they are on the shorter side.

Are They Good Running Partners?

Rotts aren’t great runners when you compare them to other breeds but are way faster than a fit human being.

If you are going out for a light jog, a Rottweiler would be a perfect partner. These puppies lack the endurance to keep running for long distances and do not enjoy the rush after a minute of running at top speed.

Take Care Of Your Pup’s Joints

Your Rott pup is not “light” by any standard. Their heavily built structure impacts their joints when they are running at top speeds. Rottweilers are also prone to hip dysplasia as well as elbow dysplasia.

Running and other techniques of exercise do not cause dysplasia on their own but can make the mild symptoms even worse.

Veterinarian Georgina Phillips explains, “Puppies have growth plates, which are primarily made of cartilage, at the end of long bones that need time to solidify. Eventually, these growth plates will close and become dense bones but this takes time. For bigger dogs like Rottweilers, this process can take as long as 18 months.”

What Are Better Exercise Options for Rotties?

Since long-distance running is out of the books, let us look at some other alternatives to get proper exercise.

Rotts love a swim. It is a great way for them to stay cool. If you do not have a big pool nearby, you can pick up a kiddy pool and watch your puppy hit the water with great excitement.

This is great for the big dogs and is quite easy on your wallet.

You can provide some exercise for your Rottie by making it focus on short bursts of playtime. You can keep an eye on your pup’s natural style and its level of endurance.

Rottweilers have a powerful build and excel at several things. They can not run properly but can make that flaw up in other ways.

You can take a brief look at their muscular build and understand that they are not built for marathons. They are however pretty good at running for shorter distances at top speeds of 25 mph.

What do you think about this character?
Can your puppy break the 25 miles per hours barrier or is he on the slower side of the spectrum?